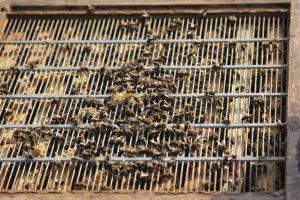 No two beekeepers will ever agree on the use of a queen excluder. Some folks think they are essential equipment; others think they just irritate the beekeeper and annoy the bees. So, rather than keep you in suspense, I’ll tell you right up front that I do not like them. That said, I have to admit to using one now and then. As I said in my very first post, it depends.

The idea behind a queen excluder is that the worker bees can easily pass through the wire mesh, and the queens cannot. They also exclude the drones. Beekeepers place excluders above the brood box to keep the queen from laying eggs in the honey supers.

The first problem is the difference between “can easily pass through” and “will easily pass through.” Most worker bees have a real reluctance to go through an excluder if they don’t absolutely have to, and hence the name “honey excluder.”

The theory is that the workers don’t like to go where the queen cannot. But, as I’ve said before, I’m not a bee psychologist and have absolutely no idea what bees think. However, the reluctance of the bees to pass through shows in their behavior. They tend to store honey in the brood chamber until it gets so bound up there are no free cells left for the queen to lay eggs. This overcrowded condition frequently leads to swarming.

If your bees swarm you won’t get a honey crop anyway, so you haven’t really gained anything by keeping them out of the honey supers. So what’s a beekeeper to do?

Here are some things that may help to keep your queen out of the honey supers.

Keep rotating your brood boxes to keep the queen in the bottom.
As the queen fills up the cells, she eventually migrates upward. You can keep her down lower by periodically reversing the position of your two brood boxes.

If you have a super of frames already filled with honey, place that box directly above the brood chamber and place the empty honey supers above them.
Queens generally won’t pass a “honey barrier,” so once you have a super filled you can just leave it in place and stack new supers on top.

Put an upper entrance just below the honey supers.
The theory here is that the queen will stay away from the light and not venture up past the second entrance. I never got this to work, but some people have had success with it.

If you are trying to produce comb honey, use square or round sections instead of regular frames.
Queens do not like these little spaces and will hardly ever go in one. I never use an excluder with section boxes and I’ve never had a queen decide to lay in one.

If you absolutely want to use an excluder, you can improve acceptance by putting the queen in the lower brood box, putting the excluder between the two boxes, and making sure there is uncapped brood in the upper box. The nurse bees will go through the excluder in order to care for the brood. However, if you use this method you have to periodically move brood into the upper box and give the queen new places to lay her eggs. If you don’t manage the two boxes, overcrowding in the queen’s box may induce swarming.

So how do I use an excluder? I don’t.  Though I have several of them, I choose not to use them.  The choice is yours to make.