I conducted my Deep Hive Inspection on June 4, 2016 under your supervision.

The weather was hot and muggy, temperature was around 80 degrees, and we started the inspection at 10:20AM.

The hive overall is thriving. We saw good brood pattern, and I noted Eggs, Lava, and Pupa stages in the hive. I did not see or identify the Queen, but we know she is present. We saw evidence of some new queen cells being formed but no eggs.   Scott explained they often build the cell, but do not use them.  Kind of a backup strategy.  We also removed some wax. We found several frames with capped honey and nector. I saw no evidence of Hive Beetles or mites. I noted that the bees did get somewhat aggressive. I have not been feeding them for over two weeks and we added a much needed Super. This went smoothly, and overall the inspection went well. I did not get stung and felt pretty comfortable with what was shown to me by you and what I have been reading/seeing in our lessons and my book. All notes were added to the Log book after I got home from the inspection.

I apologize but I did not take any pictures. I was too caught up in the  inspection and what you were saying and simply forgot.

Thanks for you help and I plan on going back next week or maybe this  weekend to see what if any progress has been made on the newly installed Super.

Josh’s Hive – From Weakest to Strongest!

Josh completed his deep hive inspection.  He has been feeding his bees since day one as they were the weakest hive in our bunch.  Today his inspection revealed a hive slam full of bees and honey.  In fact, even the very end frames are full of capped honey.  His problem is his bees are out of room for brood or honey it is so full.  He is fortunate his bees have not yet swarmed.  He is adding a super tomorrow morning and has a good chance of becoming a rare first season beekeeper with honey to spare.  He now joins Sean with a hive that does not need feeding.  Still, I must caution all about whether your bees need to be fed or not.  Your bees will tell you when you are okay to stop feeding.  Our next hive check will be next weekend.   Until then, continue what you are doing!

Leigh and I completed an independent hive check today of her hive,  her hive was the very strongest early on..and while her bee population remains strong, her honey stores are now very weak.  In fact, it looked like Erin’s hive 3 weeks ago with little capped honey.  I must caution all of you to be very careful to monitor your bees if you are not feeding.  You may even want to resume feeding.  The bees will stop feeding when they no longer want the sugar.

Can you spot Erin’s Queen below. 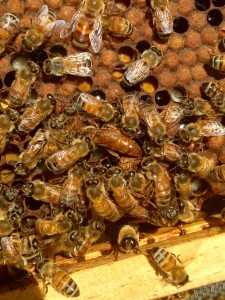 Bee hive inspection report: Saturday 6/4/16 2:00pm, weather sunny and 90 degrees. Hive conditions look remarkably better than last inspection. All frames have drawn cone, with exception of two outside frames in lower deep. Visual presence of honey, capped honey, capped brood, larva and eggs, and pollen. Queen Oria spotted laying eggs. Capped honey pattern around frame edges starting to form in both upper and lower boxes. Zero sign of mites. Ants seen on outside of hive and into top feeder. I brushed them all off and cleared out of feeder. Added 2 gallons of sugar water before closing hive. 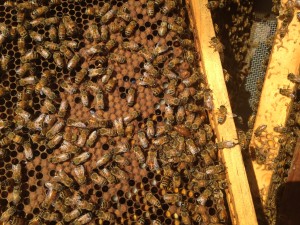 Lots of of capped brood here! 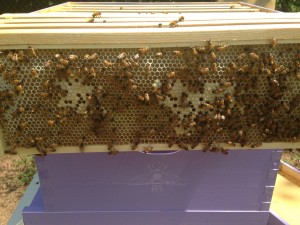 Nice to see some capped honey this time around as well!

For now I am going to ask Erin to continue to feed her bees.  They are certainly improved big time since our last inspection.

Schedule A Hive Check This Weekend for Your Hive 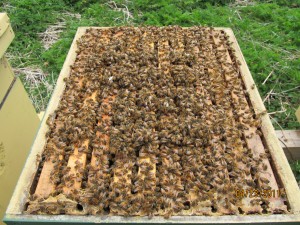 Okay Bee Team 1 (your new class name), you need to complete a hive check this weekend for your hive.  This needs to be a complete hive check.  You are looking for the following things during your inspection:

If you know when you are going, or when you go, send me a text, and I will try to join you.  Sean and Leigh should definitely schedule me to be with them, the rest of you can do this on your ow, but I would like to come and film you if I can. 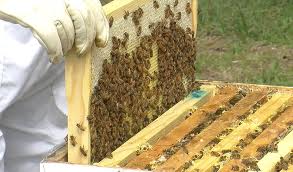 END_OF_DOCUMENT_TOKEN_TO_BE_REPLACED

Category: Uncategorized | 2 Comments on Schedule A Hive Check This Weekend for Your Hive