Below are photos of my wife Suzanne’s good observation skills and quick thinking.  She called me with her observation.  I had her make photos as I called Chris Murphy, a fellow beekeeper, and asked him to asssit me as I was in West Jefferson gathering equipment for our new beekeepers.  Chris responded quickly and after two attempts was able to move the swarm into my nuc which has been waiting for a swarm for two years.  I am now in our monthly Gaston County Beekeepers Association monthly meeting and can hardly wait to get home to see my new bees!  My guess is this is a swarm from Queen Harper’s Hive (Hive #3 in my Apiary). 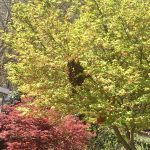 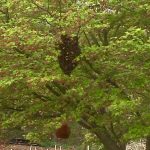 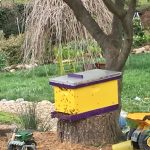 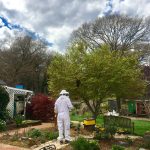 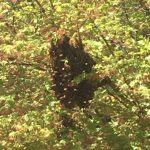