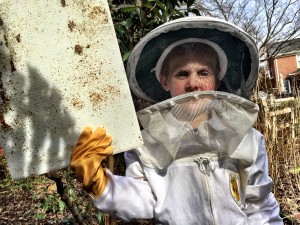 It’s Time to get Serious

After trying to send two emails with this information through my distribution list, and losing both of them entirely without ever being sent, I have decided I best use our blog to communicate.  This Saturday I will travel to West Jefferson to retrieve our bees.  This means we must have everything ready so that they can be placed in their new homes.

Please use this post as a guide to insure success.

We will begin our hands on class and demonstration promptly at 4:00 PM this Saturday.  This means you need to arrive at least 30 minutes ahead of time to make final prep on your hives, gear up, and prepare for the lessons.  I will demonstrate with a new hive I have already placed in the hive all that you will need to do.  Then you will complete the same process with your own hives.

ALL MEMBERS of our Bee Teams are encouraged to attend.  Those who have a year of experience will now have an opportunity to be a mentor.  You are welcome to bring others to observe and photograph from a safe distance.  they may even want to bring a lawn chair.

What to do BEFORE Saturday

Ways to Successfully Light Your Smoker 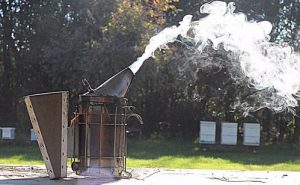 Believe it or not, until you get the hang of it, lighting a smoker can be one of your greater challenges in beekeeping.

With my own struggles in mind I offer several videos for you to watch and learn from.

Are You Checking Your Hive?

Thus far in the last two weeks I have captured 4 swarms of bees.  It is critically important that you are checking your hives weekly to determine if their top Super is filled to 8 frames so you can add supers.  Space is a huge cause of swarming.  At least every other week you need to check for swarm cells.  Just lift each box up and look for swarm cells (queen cells) on the bottom. If you see them, cut them out.  If during a frame by frame inspection you find these cells in the middle or upper portion of a frame, you are looking at a supercedure situation and they may be replacing your queen…best to leave this alone.

Folks, it is your hive now.  I am here to help upon request, but YOU are the bee keeper and you must manage your hives.

Captured and Relocated My Third Swarm of Bees Today! 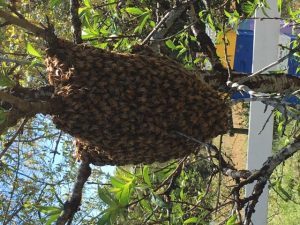 This has been an exciting two weeks.  Today I caught my third swarm of bees in Alexis.  After the capture I let them settle down and this evening brought them back to mymapiary and inserted them into my demo hive.  Things went very well and they seem very happy to be in their new home.  These girls will travel with me for the next year as they begin work on their new home.

I am happy to report that the trap out device is working very well at Chip’s home in Dallas and I anticipate moving this hive to my house late next week.  I plan to treat both of these hives with oxilic acids for mites before they begin building new cone and laying new eggs.

This Spring is Going To Be A Challenge 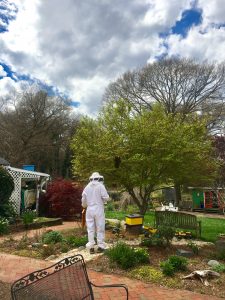 It has been a very strange Spring. The southeast was running about 3-4 weeks ahead before a cold snap put on the brakes while that same cold front brought a blizzard to the northeast. The west coast has been unseasonably cool and wet. One constant seems to be that the colonies which have made it this far are looking very strong and healthy – and that has me very nervous!

This type of situation can be a perfect storm. First, a good strong colony will brood up early and heavily. Given the timing of the bloom being highly variable (i.e., starting, stopping, and then starting again) I am concerned about the nectar flow which is typically strong this time of year. Personally, I will be monitoring the resources in my hives. Several years ago we had beekeepers telling us stories of starving colonies in May due to the weather. I don’t want a repeat.

Second, if the strong colonies have ample resources, perhaps the best thing that can happen is for them to swarm. I know you might be thinking that a swarm is not a good thing; however, it breaks the brood cycle which will delay the growth of the Varroa population. If colonies don’t swarm we could be looking at dangerous levels of Varroa very early in the season and colonies succumbing to the effects. You can certainly simulate a swarm by making a split into a NUC which then provides an nice resource for other colonies and a queen should you need it later. If you don’t want to split your colonies perhaps treat them with MiteAway Quick Strips before it gets too hot.

We are off to an atypical year. The takeaway, be attentive, don’t take anything for granted, and pay attention to the Varroa. Just because you look at a bee don’t see the pesky mite doesn’t mean you don’t have them. You must test!

Bees Swarm and Make Their New Home in A Friends Home

Today I received my first call for help to rid a homeowner of bees inside their house.  Like a country doctor, I dropped everything I was doing, gatherd my gear, and headed for their location.  While I have been successful capturing swarms in bushes and trees, this was my first call for help with bees in the house.

Upon arrival My friend took me inside and showed me the bees he held behind a closed bathroom door.  There were about 200 bees in the bathroom, over 50% were dead.  However, it was very obvious that there were many, many bees overhead as we heard their buzzing and tap, tapping above our heads.  It was honeybees and it became apparent their entrance was from an overhead ventilization fan.  Once outside I discovered the screened protection for said fan was missing and our girls had decided this was a perfectly fine new home.  It was also apparent that the fax was not connected to the fan, thus the bees were making their new home between the floor joist of the second and first floors.

What to do?  It looked like a job beyond my capability, and a quick call to my fellow members of the Gaston County Bee Association proved me right…at least initially.  The solution would involve cutting out portions of the ceiling to attempt to recover the bees.   I informed the homeowner I would come back with expert help and gave him some idea of the solution which he approved of.

I wanted to solve this problem on my own, but my construction knowledge is limited.  Today, I found time to research the problem some more and came across what I think is a remarkable plan to remove the bees.  No tearing out ceiling, no vacuuming bees (hard on bees), no destroying the bees.  Instead we will be constructing a “trap out” that will enable us to allow the bees to leave their new hive, but not return.  We will also be placing a small hive baited to capture the attention of the bees and encourage them to move in.  We will install our idea tomorrow and will take photos and movies to allow you to see our progress.  Will probably take about two weeks.

See the YouTube below to get an idea of what we plan to do!

Category: Uncategorized | 1 Comment on Bees Swarm and Make Their New Home in A Friends Home

State Magazine has great ideas for things to plant for our Bees!

7 Tips for Planting a Bee-Friendly Garden in North Carolina