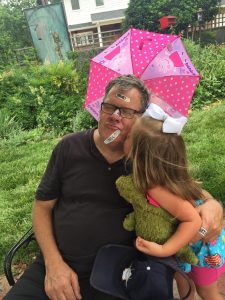 Just having some fun with my granddaughter and her love for bandaids.

This weekend I took Keli on a fabulous trip to West Jefferson to fetch some new bees and remaining equipment for our apiary.  It was a wonderful trip and Keli fell in love with West Jefferson, as most people do.  We came back to reinstall bees for Keli and my yellow hive at the Apiary.  We also picked up replacement bees for Erin Denison.  Shelly Felder, Master Beekeeper and owner of the Honey Hole absolutely stands behinds behind her bees and all products she sells us.  Some of you ask why I go to West Jefferson for bees and supplies…..her knowledge, customer service, and warranty is second to none….this is why!

The new bees have been installed successfully and we also picked up a new queen from Tommy Helms last Friday and installed it in Joe and Irene’s hive.  Sunday we came back to check their hive and make sure the new queen was released (she was) and discovered the old queen was still in the hive.  We continued to look for both queens for over an hour s we lost sight of the old queen and for the longest time could find neither.  The new queen should be easy to find as she has a nice yellow dot of paint on her head.  The more we looked, the more dismal I felt as I feared the old queen had already destroyed the new queen.  However, as we were about to give up, I spotted the new queen in all her glory up against the inside of the hive.  She quickly disappeared in a mass of bees.  With new determination we sought out and found the old queen.  Once we spotted her we took her out and ended her life quickly.  We were fortunate to find her and get rid of her as she would have easily killed the new younger, smaller, queen.  Remember…one queen per hive!

All this to remind us that we must be careful when we inspect hives and find swarm cells (queen cells).  Our first inclination must NOT be just to cut the cell out and discard it!  Rather, we now need to complete our hive inspection and determine if we have a working queen.  If there is no capped and uncapped brood….or the number is substantially down…leave the swarm cells alone.  The hive knows what it is doing.

Unfortunately I forgot to ask Irene how the rest of the hive was doing and they removed a very nice queen cell…causing us to have to find and buy a queen.  Unfortunately her queen, though not dead, had aged out and was no longer producing.  In her case, she should have left the cell alone and the hive would have produced the much needed new queen.

also, just cutting out a queen cell is not your only alternative.  You have the makings of a new hive and can use that queen cell as the nucleus of this hive.  I will place a new lesson on this next, so watch for it!

We all continue to learn at the Smith Educational Apiary resulting in better Beekeepers.  Oh yes, and black snakes have been sighted crawling up our hives.  Leave the alone…they are chasing and capturing mice who are an enemy of our hives.  Black snakes do not eat bees and will not harm our bees…in fact they are protecting them.

Would love to hear from all of you and how things are going with your hive….new things you have learned or observed, and any questions you may have.

To Bee or not you Bee….this is the question!