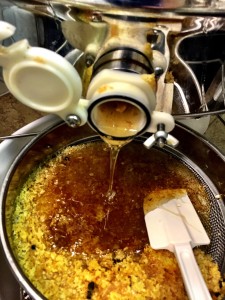 About three-quarters of the world’s honey is contaminated with pesticides known to harm bees, a new study suggests. The insecticide levels are within the range considered safe for human consumption, the study’s authors point out, but they are high enough to cause serious problems for bees — and what’s bad for pollinators is ultimately bad for people, too.

The study’s authors spent three years collecting nearly 200 honey samples from six continents, skipping only Antarctica. They tested the samples for five kinds of neonicotinoids, a widely used class of insecticides that has been linked to health problems in both wild and domesticated bees. At least one neonicotinoid was detected in 75 percent of all honey samples, while 45 percent of samples contained two or more of the compounds, and 10 percent contained four or five.

“The concentrations are often very low, but we are talking about pesticides that are extremely toxic: something like 4,000 to 10,000 times more toxic than DDT,” lead author Edward Mitchell, a biologist at Switzerland’s University of Neuchâtel, tells the Guardian. About half of honey samples had neonicotinoid levels high enough to affect bees’ learning, behavior and colony success, Mitchell says, potentially making the insects more vulnerable to other threats, from habitat loss to viruses and invasive parasites.

The study points to neonicotinoid problems almost everywhere bees exist, although it’s apparently worse in some parts of the world than others. North American honey had the highest contamination rate — with at least one neonicotinoid found in 86 percent of samples — followed by honey from Asia (80 percent), Europe (79 percent) and South America (57 percent).

bee pollinating lemon flower
Bees and other pollinators can pick up residue from a wide range of pesticides as they forage in flowers. (Photo: Larisa Blinova/Shutterstock)

The residue even showed up in honey from remote places where it wasn’t expected, including oceanic islands and a forest surrounded by organic farms. “We were shocked and surprised,” Mitchell tells the Verge. “There’s contamination everywhere.”

Despite the danger to bees, all honey tested safe for human consumption, at least according to U.S. and European regulations. “On the basis of our current knowledge, consumption of honey is therefore not thought to harm human health,” the researchers write in the journal Science. Yet while the honey complied with “maximum residue levels” (MRLs) allowed by law, the researchers add that “recent evidence for impacts of neonicotinoids on vertebrates, including humans … could lead to re-evaluating MRLs.”

And even if neonicotinoids in honey are completely safe for humans to eat, we would be foolish to ignore this problem, the researchers say. Many populations of bees and other insect pollinators are now in decline around the world, and as co-author Christopher Connolly writes in an addendum to the study, that doesn’t bode well for the insect-pollinated crops and ecosystems on which humanity depends. “The decline in bee abundances is particularly alarming given their role in pollination,” Connolly writes, adding “bee losses are a major threat to human food security and ecosystem stability.”

Related on MNN: 12 plants that can boost your local bees