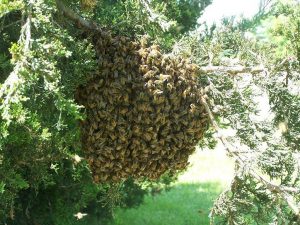 You might be wondering why a swarm would hang from a tree, and just sit there doing nothing. The main reason is that the scouts are out, looking for a nice place to make their final home. That’s the beekeeper’s tricky job, to capture the swarm before the scouts return and to make sure the scouts cannot find the newly captured hive.

It is common for a beekeeper to capture a swarm by shaking the swarm into a hive, and then leave the hive below the tree until dark. The problem is, the scouts can find their hive, enter it, convince the swarm there is a better place, and soon they will leave the hive. So, capture and move it once they are all in. 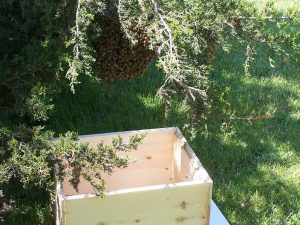 In this picture, notice the swarm hanging just above the deep hive body sitting on a bottom board? Now, all we have to do is give the branch a hard shake and all the bees and queen drop in the box. If they don’t? Just do it again, only harder!

Keeping a swarm in their new hive box is tricky too. Here’s what I plan to do. I will save drawn comb just for the capture. Drawn comb is another best friend of a beekeeper. Swarms will stay better if there is drawn comb, and a lot better if you can add a frame of brood from another hive. I spray the foundation with sugar water too. What bee would leave a sugar coated comb? I also restrict the opening down to only a small, small opening where only one or two bees can get through at a time. It’s hard to swarm again if everyone has to go single file through the door. It is suggested We keep it this way for at least 24 hours.

Some tips on capturing a swarm:

1) When you get a call, ask good questions. Ask how large the swarm is, by having the caller compare it to a soft ball size, foot ball size, bowling ball size or beach ball size. This will help you know what to take. Also, ask how high the swarm is off the ground.
2) Have equipment ready like a fireman. You’ll need a spare hive.  Have an extra one on hand. It’s an extra expense, but you save by not having to buy bees! You’ll also need sugar water to spray the new frames. Have the sugar water already mixed and in a spray bottle. You’ll also need ropes to possibly tie off limbs, a nice limb saw, gloves because some tree sap is sticky when you cut the limbs and a secure way to tie down the hive box you are transporting home. You don’t want the hive bouncing apart in the back of your truck, only to find all the bees are gone when you get home with your captured swarm. I keep my swarm supplies in a bag so that I can grab it and run. I also plan to keep my ladder close to my truck from late April through May. It takes too long to load it and strap it down.
3) Warn Bystanders. The home owner or bystanders will gather to watch. Although swarms are not aggressive and usually do not sting, they are bees with stingers. I always warn bystanders to back away or watch from their car or bedroom window. Your work will most certainly draw a crowd.
4) Be Careful. Don’t try to climb the highest tree or put yourself in danger. Some swarms are way up in the tops of trees. The most dangerous aspect of swarm capture is the climb! Be careful!
5) Work fast, but not hurried. The bees are waiting for scouts to take them to a better home. Or the queen may have become too tired on their way to the better home and they may just be taking a break, a quick break!
6) Retrieval. Shake, cut or vac? You’ll have to make important decisions once you see how the swarm is positioned. You’ll have to decide whether to climb into the tree, or use a ladder or you may be fortunate enough to simply have the swarm at waist level. Then, you’ll have to decide if you can shake the branch or cut it. If the swarm will fall directly into the box without having to fall through other branches, then by all means shake! If not, and they are on a small branch, cut the branch and carry it down to the box. This is really dangerous and takes a lot of balance and strength. Some swarms can be very heavy. This is where your ropes come in handy. Before cutting someone else’s tree, ask permission. Explain the size of the branch so they will not be surprised when their beautifully shaped tree now looks like the cookie monster took a bite out of it.  When swarms are on buildings, cars and permanent structures, you have to use a bee-vac. You will never scrape them all off or get the queen.   With a bee-vac, you simply vacuum them safely into a cage. A bee-vac is the second most important tool to the beekeeper, second to the hive tool, According to beekeepers.  I do not have one, but if we get some additional funding I may ask the Apiary to purchase one for us to share.
7) Place the captured swarm box in its new location ASAP. Though you must allow adequate time for the swarm to work its way into the box, you must move it to its new location as soon as possible. There is a good chance that the swarm has a plan, a planned place to go. You’ve got your work cut out to disrupt that and convince them to go where you want them to go and to stay.

8) The white sheet approach. Using a white sheet works! It seems to help the bees notice the dark entrance to the hive box you are using. I do not know a bee keeper who uses use a white sheet. Once You have removed a swarm from garden you place a hive box on the ground very close to the hive. They began walking in. Personally I like the idea of dropping the swarm straight into a prepared hive.  If I get the queen in…the rest will follow!
How to prevent swarms in your own hives
Swarm prevention is vital for a good honey production year. Swarming is a natural instinctive behavior and is how a mature hive multiplies into two hives. Attempting to prevent a swarm is a challenge, and sometimes after doing everything to prevent a swarm, they still swarm. If a hive swarms and 50% of the hive leaves, then it will unlikely be able to produce a good honey crop that same year due to the reduction in bees. If you are fortunate enough to capture the swarm, the good news is that you now have two hives, but the bad news is, neither will provide a honey crop that year. According to what I have read you can usually place the swarm back into the hive it came from, and the swarming instinct will have been satisfied.  So, the best honey crop comes from operating a hive slightly below the swarm congested level, while preventing a swarm.

Congestion vs. Crowded –you need open cells!
Many beekeepers have been taught to provide more space in the hive to prevent swarms but this is only partially true. Placing a super of undrawn foundation on the hive will not help if you’ve waited too long. Hives swarm because of congestion and overcrowding and more so from congestion. Congestion means that there is incoming nectar and pollen in large quantities, and the queen is laying well, thus there are not enough empty cells to accommodate the need. This is why undrawn foundation (more space) does not always help. They need drawn comb with open cells, not just more space. Sometimes, you can pull out a frame or two of brood from the brood nest area and add two frames of either drawn or undrawn foundation, and this might be a temporary solution. But by this time, you may have waited too long.

Remove swarm queen cells. The obvious swarm sign is the presence of queen swarm cells. These queen cells are called swarm cells because the are usually located on the lower section of a frame in the brood chamber. You can tilt back a deep hive body and look for these swarm queen cells hanging from the bottom of the frames. Another type of queen cell is the superseding queen cell, which is located higher up on the drawn comb. A superseding queen cell means that the old queen is being replaced because she is not productive or injured or dead. Leave these superseding cells alone! The bees know what they are doing, and why they need this replacement. But, if you want to try and prevent swarms, remove the swarm queen cells from the bottom of the frames.

What do queen cells look like? They are shaped like peanuts and hang out either from the foundation, as with superseding cells, or they hang from the bottom of a frame, as with swarm cells. They are about the size of the first joint on your little finger.
I have been told to save the cells in a mason jar with air holes in the lid, keeping them in a warm spot in the house, just in case I need a queen. I also have several small hives (nucs) that I couldn’t store these queens in. It’s cheaper than buying queens. I have a friend who sometimes will have two or three jars full of queen cells on the kitchen table. He’ll wake up and while eating breakfast, watch a queen emerge, then take her to her nuc box using a queen cage, slow introduction method.

In closing, I’ve got to tell you about using a swarm capture stocking cap! My friend got the idea from reading what Langstroth did in his bee yards. He would hang dark woolly items from trees, so that a swarm would light where he had placed the item, instead of high up in the tree. One of the bee keepers in my bee school uses a black stocking cap, fills it full of cloth, and hangs them around his bee yards. It may not work every time, but when it does, it sure makes the capture much easier. To the bee, the dark, swarm shaped stocking cap looks like the place where other bees have landed.  I would like to try this idea, at least in our Apiary.  I am not sure how Suzanne would feel about me hanging them in our back yard?  Perhaps some of you would be willing to make some of these so we may hang them in our apiary .