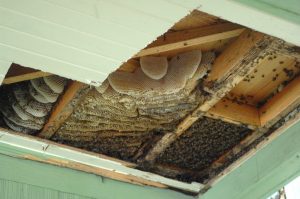 Today I received my first call for help to rid a homeowner of bees inside their house. Like a country doctor, I dropped everything I was doing, gatherd my gear, and headed for their location. While I have been successful capturing swarms in bushes and trees, this was my first call for help with bees in the house.

Upon arrival My friend took me inside and showed me the bees he held behind a closed bathroom door. There were about 200 bees in the bathroom, over 50% were dead. However, it was very obvious that there were many, many bees overhead as we heard their buzzing and tap, tapping above our heads. It was honeybees and it became apparent their entrance was from an overhead ventilization fan. Once outside I discovered the screened protection for said fan was missing and our girls had decided this was a perfectly fine new home. It was also apparent that the fax was not connected to the fan, thus the bees were making their new home between the floor joist of the second and first floors.

What to do? It looked like a job beyond my capability, and a quick call to my fellow members of the Gaston County Bee Association proved me right…at least initially. The solution would involve cutting out portions of the ceiling to attempt to recover the bees. I informed the homeowner I would come back with expert help and gave him some idea of the solution which he approved of.

I wanted to solve this problem on my own, but my construction knowledge is limited. Today, I found time to research the problem some more and came across what I think is a remarkable plan to remove the bees. No tearing out ceiling, no vacuuming bees (hard on bees), no destroying the bees. Instead we will be constructing a “trap out” that will enable us to allow the bees to leave their new hive, but not return. We will also be placing a small hive baited to capture the attention of the bees and encourage them to move in. We will install our idea tomorrow and will take photos and movies to allow you to see our progress. Will probably take about two weeks.

See the YouTube below to get an idea of what we plan to do!