Lesson 27: How to Tell When Your Hive is Queenless

Lesson 27: HOW TO TELL WHEN YOUR HIVE IS QUEENLESS

This year a number of us have discovered “queenless” hives.  This caused me to do some research for us and place a lesson on our blog that addresses Queenlessness.

Queenlessness is serious. In fact, queenlessness is the single most greatest threat to a hive’s survivability than any other disease or pest. Yet, it is easier to correct and overcome than other pests and diseases.

Then why is queenlessness such an issue? In this lesson we want to address several key factors about queenlessness:

1) Why do queens die or disappear?

2) How to determine if your colony is queenless

3) How to make a queenless colony queen right

5) How to determine how long your hive has been queenless

7) How to deal with a laying worker

8) Suggestions to help avoid your hive from becoming queenless.

Every hive has only one queen. Her primary role is to lay eggs, sometimes 1,000 – 3,000 a day. Without a prolific queen, the colony will never build up in population and will always lack adequate foragers, thus there will be a constant lack of incoming pollen, nectar and water. The colony will eventually become so weak that it will succumb to pests or diseases.

However, with a young and prolific queen a colony will quickly increase in population and ample supplies of pollen, nectar and water will allow the hive to expand, be productive and resist most common pests and diseases. Therefore, a queen right hive is essential at all times during the year. Queen right is a term used to define a hive that has a prolific queen. We believe that by keeping a hive very crowded, but not congested, a hive remains strong enough to resist most pests and diseases.  But even hives that are queen right can suddenly become queenless. How does this happen so quickly?

Why do queens die or disappear? Remember, honey bees are livestock. More specifically, bees are bugs, insects that are at great risk not only from the normal threat of nature, but also from the hostile world beyond the sweet clover fields and tranquil meadows. Traffic, pesticides, insecticides, and those who see all insects as a pest pose a great threat to the survival of the honey bee. Because a queen is a small ¾ inch bug, she too can perish for various reasons. She can become ill or old and die. She can accidentally be smashed by the beekeeper when frames are pushed back together or covers are placed on a hive. She can be killed by the other bees if she shows signs of inferiority. And when another queen is raised in the same hive, the queens will fight and only one will survive, but certainly they both can perish in the fight.

A virgin queen must fly out of the hive several times to mate. This mating flight can be very treacherous. She can easily become a tasty meal for a bird or fall victim to nasty weather while she’s out. And even if she does make it back, the question is, did she mate adequately. So even though a hive can successfully raise their own queen, there is no better proof that the colony has a prolific queen until eggs are visible.

How do we determine that our colony is queenless? No eggs. You can click on the images to see a larger version. Study the picture and familiarize yourself in identifying eggs and larvae. 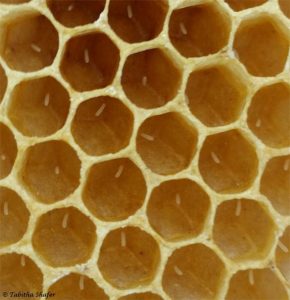 Even if a mated queen is present but we see no eggs, we are essentially queenless. You’ll develop a skill that will allow you to open up your hive and listen to the bees and observe their behavior. A queenless hive usually has a louder roar, and usually appears more disorganized. If you do not see any eggs on any frames, then you are queenless.

How can we make a queenless colony queen right? Purchase a new, mated queen in a cage and introduce her to the new hive with a candy plug. Or if the hive is raising their own queen, allow them to do so. If you allow the colony to raise their own queen, you will have to wait longer until the virgin queen emerges, matures, mates and starts laying. If you purchase a mated queen, she will start laying within a few days.

Is there a way we can tell if our colony is about to become queenless? Yes and no. Obviously if the beekeeper smashes and kills the queen, this cannot be known in advance. However, if the current queen has space to lay but is laying poorly, then the colony may try to replace her soon or they may not. Or if you see mostly drone brood, which sticks up above the smooth worker brood more like bullets, then you know your queen will soon perish. Also, if you see queen cells, either swarm cells on the lower part of the frame or supersedure cells on the upper half of the frame, then watch your hive carefully. Something may be wrong and it may become queenless. Finally, if you know the age of your queen, then you can determine how long she has left. This is somewhat unknown because some queens can do real well for several years, maybe three or four years. Some are only good for one year. Therefore, it is best to requeen your colony each year.  (I am not sure if I totally buy into this, but I have begun to requeen hives that are not productive and all queens two years old)

When you find that your hive is queenless, it is important to know how long it has been without a queen. This will tell you how long you have to obtain a new queen. For example, if you see only sealed brood as in the picture to the left, you know that your queen has been gone for more than a week. Sealed brood looks different than sealed honey. Sealed brood is usually darker and more textured looking. Whereas sealed honey is brighter and looks more wet. If you need help learning the difference, just use a tooth pick and poke a cell to see what’s inside. If you see unsealed larvae, then you have some time before your hive experiences the affects of queenlessness. But you should work promptly to provide a new queen.

If there are no eggs and no sealed brood, it means that you will have nothing more than what you have. Each day, your hive will become smaller in number because without emerging brood the older bees will die. If you have no brood at all, sealed or unsealed, then you have an emergency! You must get a queen within the next few days. Pay extra and have her sent overnight. Every day counts. Your hive is a mere 30 days away from total collapse. Act fast.

Once the queen has perished, and the hive has attempted but failed to raise a replacement, you must act fast because without a queen, workers could become what is known as a laying worker. With the strong pheromone of open brood, not the queen pheromone, the other female workers’ ability to lay is suppressed. But without open brood pheromones, several female workers may start laying eggs. But since a female worker is not fully develop as a layer nor has she ever mated, nor could she, then her eggs are all infertile thus they will only become drones, male bees.

Sometimes a newly mated queen or a queen without room to lay may lay more than one egg in a cell, but a laying worker will fill up a cell with eggs. Study my photo here to familiarize yourself with what the eggs look like from having a laying worker. 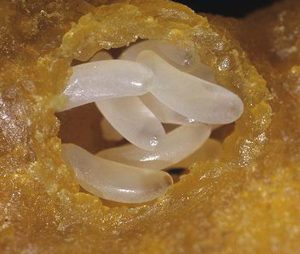 See the numerous eggs in the cells. Remember to click on the image to enlarge for a closer look.

It is suggested that even strong, queen right colonies always have a few laying workers, but the bees keep them in check.

Finally, how can beekeepers protect their hives from becoming queenless?

Inspect your hive every 2 weeks. You do not necessarily have to spot the queen as long as you see that there is a good number of eggs and larvae. The photo to the left is what you want to find. Brood in various stages including eggs. This photo shows eggs near the edge of the frame.

Also be sure there is plenty of room for the queen to lay. If you see your hive is honey or pollen bound, you either have to shake out the pollen or extract the honey or put in empty drawn comb if you have some available. Failure to provide room in your hive for expansion can cause the bees to become congested. Remember we advocated crowded hives, but not congested hives. A congested hive means there is no more open, drawn out cells for the queen to lay in, or the forages to store pollen and nectar. Thus they will prepare to swarm.

One of my hives did just that. Because we crowd our hives, they can become congested faster than we can sometimes give them drawn comb. But we’d rather err on the side of being too crowded than having a small and weak colony. Swarms are friendly. 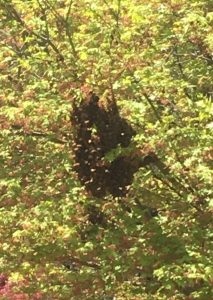 This swarm was gracious enough to agree to have their picture.  I later shock them into a new hive and they are content now. By the way, if you are a beekeeper, you absolutely must have an extra hive on hand to catch swarms, swarms that come from your hive or for when you are called upon to help save a swarm near you.  Several times this summer I had fairly new beekeepers called me because he caught a swarm and had nothing to put it in.

Fortunately, I rushed him out a hive. But I cannot always send a hive right out, so please plan ahead. June is a big swarm month. Hives seem to swarm more on the first nice day after a storm or rainy weather. Now the hive that produced this swarm may become queenless. Hopefully they did their job, and produced a new queen. The old queen leaves with the swarm and the new emerging queen takes over. But remember, she is virgin queen, and must fly a mile or two away to mate with other drones, not from her hive. She can be killed in her flight by birds or storms. Will she make it back, and will she be mated well. Much is at stake.

Again, much of what I am reading says to Replace your queen yearly to ensure you have a young, prolific queen.

A Queenless Hive and How it was Fixed